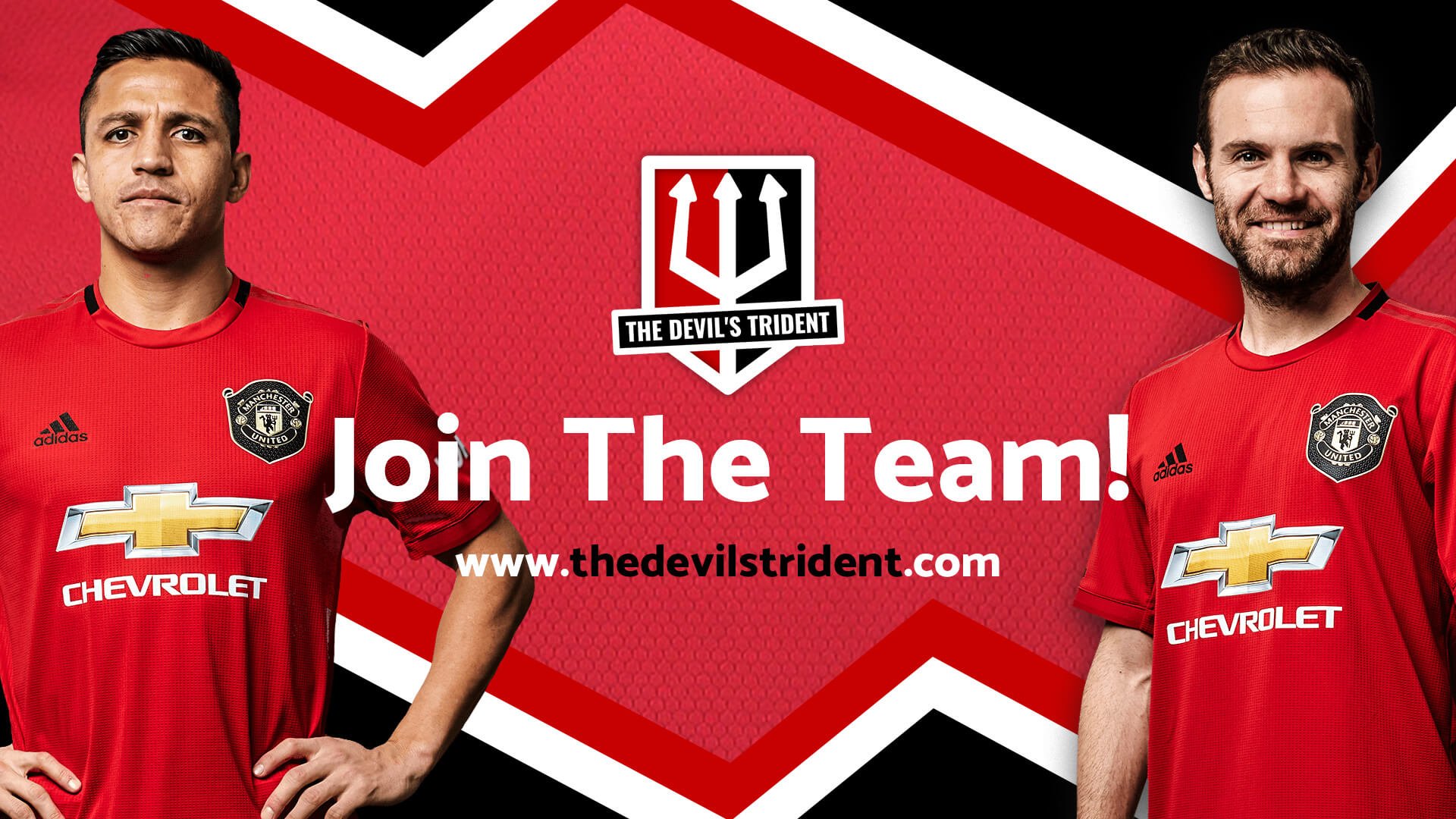 Write for The Devil’s Trident

Ever wanted to have your say on a Manchester United fan site?

As we rapidly approach the start of the 2019/20 season and Ole Gunnar Solskjaer’s first full term in charge as Manchester United manager, we’re looking to make some summer signings for The Devil’s Trident.

As some of you will know, The Devil’s Trident was only formed as a Manchester United fan site at the start of last season (what a time to start eh?). Whilst it has essentially been a one-man band so far, there has always been the intention to get other United fans involved in this project. I would love to get a range of differing thoughts and opinions on the club we love across the website and social media pages.

Last season was a bit of a test run but now it’s time to get other fans on board at thedevilstrident.com and give you the chance to have your say on just about anything Manchester United related!

What United articles are The Devil’s Trident looking for?

The site is already split into 4 main categories covering a wide range of features;

They’re mostly self-explanatory, but I’ll run through those a little more and give you an idea of what we’d like to cover and how.

This is one area that the site really lacked last year and I’d like to put that right. There’s constantly news stories flying around about Manchester United for obvious reasons – so many that it’s quite hard to keep up! If you’re in a position to help get those quick news stories on to the site and keep everyone up to date then get in touch.

Ideally, this should only cover stories that are factual – this isn’t a site were clickbait articles are going to be used. For that reason we’ll be avoiding transfer rumours and instead we’ll handle topics with a bit of substance like new signing confirmations, fixture announcements/cup draws and press conference stories. Basically, anything we can back up with facts!

Your chance to give your opinion on a current issue at Manchester United. We’ve all got different viewpoints about various happenings at the club, that’s what makes being a fan interesting. The United Views section is where you can voice your thoughts about everything from the players, the manager and the club in general.

We will also tackle Transfers and Tactics here – if you think there’s a player we should sign, this is your chance to make a case for that. Think we could be approaching games with a certain formation, or a particular defensive selection? Write an article about it and make your case!

I handled this personally last season but found it was all I had time for and therefore I’m also opening this section up for contributors. Plus, this season the Match Day section will not only feature the Match Previews. We’re also going to be doing Match Reviews.

The previews offer a chance to pick Predicted XIs to be featured on the social media pages as well as obviously looking ahead to the games. These are great for fan debate and I plan to rotate the duties for different games across the season.

There’s also the potential to gather short fan reviews for each game from non-contributors so that all The Devil’s Trident’s followers can have their say without being a writer for the site!

There’s always room for a bit of nostalgia where Manchester United are concerned – after all, we have the history for it. The United Rewind feature allows you to recount famous games in our history, both good and bad.

Maybe you have a story to tell from a certain game that others might want to hear or you simply want to re-live iconic moments. The choice is yours! There’s no particular rule on what games qualify for this feature but anniversaries of famous fixtures and repeats of certain games will help form the section as time goes on.

There’s extra bonus points up for grabs if you’ve got photos or footage from these games that can help illustrate these famous moments!

Of course! The plan is to have all of the contributors join a Facebook group where we can pitch in ideas – even if you come up with something that doesn’t fall in the original categories, we can certainly consider it.

How do fans get involved?

If you’re interested in writing for the website, you can get in touch via e-mail at editor@thedevilstrident.com or message one of our social media pages.

You’ll need to include your full name, your e-mail address and either a link to previous writing work (about United or Football ideally) or a sample article about a current United issue of at least 500 words. The purpose of this is to make sure that news stories and features uphold a certain standard of writing in order to be published on the website.

Is this a paid job?

In short, no. I run the site and social media pages purely as a hobby as it stands. Yes, there are adverts on the site but believe me, they’re years away from providing any sort of profit as it stands. If that situation changes, it means the site is very successful and payment can and would come into play then.

For now, it’s about giving our views and covering the club we love. There’s absolutely no obligation to provide content, you’ll never be pressured into writing – you choose when you have something to say and it will be considered for the website and shared across the social media pages.