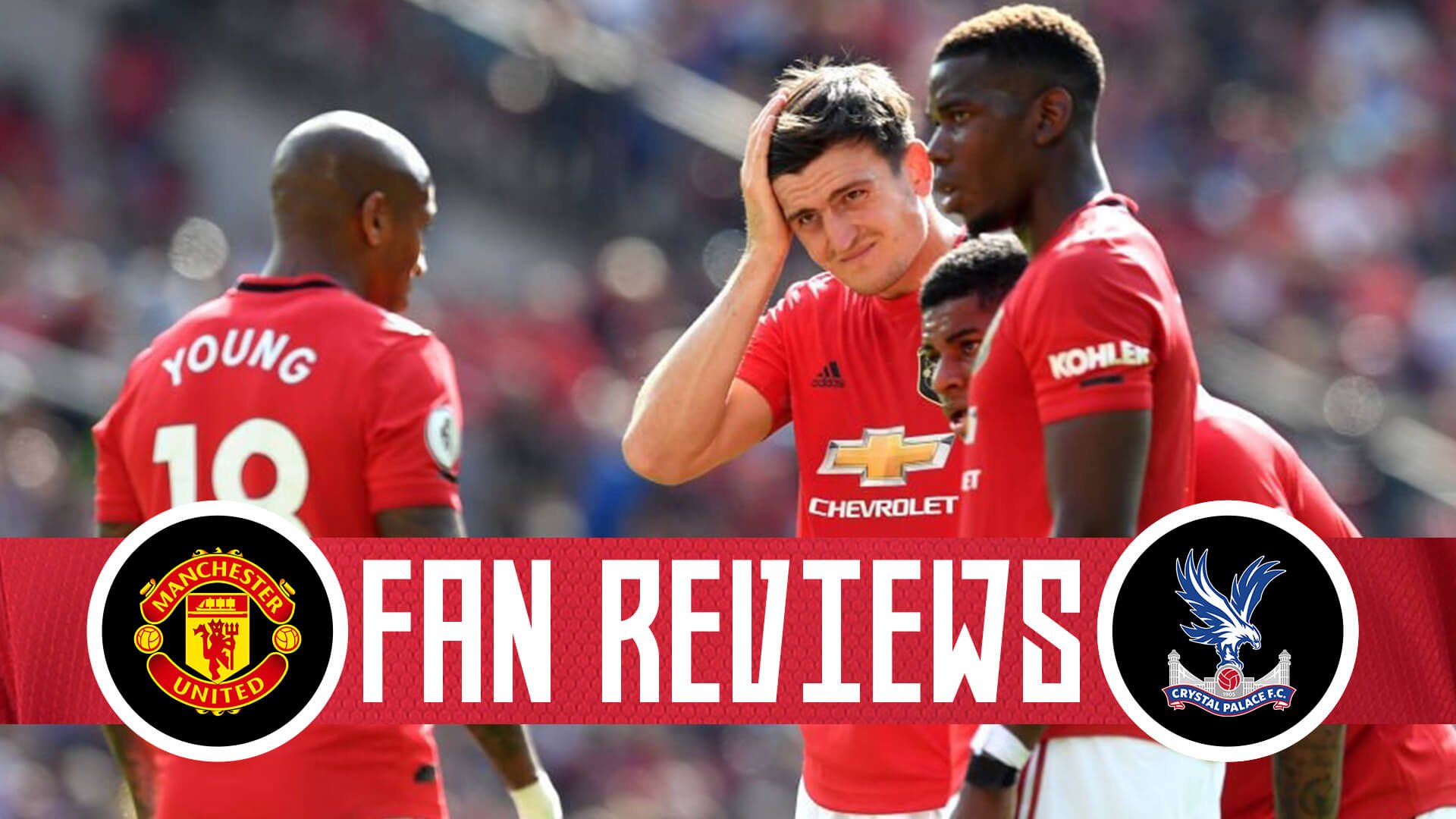 We’ve seen both sides of this United team already this season.

We can’t dress it any other way; Saturday afternoon’s defeat to Crystal Palace at Old Trafford was frustrating and bewildering in equal measure.

Having got back into the game in the last few minutes with a superb finish from Daniel James, the Reds gave away all three points through mistakes from Paul Pogba and David de Gea.

Add in Marcus Rashford’s missed penalty during the second half, which in fairness was unlucky, and you’ve got yourself a despondent fan base after the final whistle.

As ever, even in defeat, we asked Reds across The Devil’s Trident’s Facebook, Twitter and Instagram to give us their post-match assessments of United’s performance this weekend. It’s safe to say that there wasn’t many singing the praises of Ole Gunnar Solskjaer’s men…

I’m sick of saying this now. We badly need a creative midfielder, a left winger and a prolific striker to get us 30 goals a season.What we have at the moment is not the United of old when we were losing games until the last few mins and coming back to win them. We don’t have the players to do that.

Lethargic, lacking ideas in the final third, boring and predictable. It’s what happens when you hire a third rate manager who wants to build a team around a player who doesn’t want to be at this club and who gives a massive contract and the main strikers role to a player who in my opinion hasn’t really deserved it. He can become a great player but didn’t deserve the huge contract and as for Lingard, there are no words. Thanks for the opportunity to rant but this is going to be a very long frustrating season.

Expectation: Goal fest. If we put four past Chelsea, how many are we going to put past Crystal Palace? Reality: Huge eye opener.

Something just didn’t seem right, first 3pm non-televised kick off in some time. I don’t know what it was but there was something about this game that had me worried. We had the majority of the possession, and we had our chances yet they were few and far between. Crystal Palace’s opening goal was their first shot on target, from a long ball that should have been defended better.

Half time came and went and in the second half we seemed better. A penalty after McTominay was fouled granted us the opportunity to equalise. Up stepped a calm-as-always Marcus Rashford who sent the keeper the wrong way and blasted the ball… against the post! Literally inches away from 1-1.

We kept at them and eventually we got our deserved equaliser in the 89th minute with a stunning curling effort from just inside the box from Dan James. The belief was with us, you could feel the expectation that a winner will happen! It’s happened before, it will happen again! Five minutes of injury time, plenty of time for a winner. Then, in the 93rd minute history repeated itself, unfortunately not in our favour.

Crystal Palace, with their third shot on target, fired the ball past De Gea who potentially should have done better but couldn’t keep it out. Full time, we lost 1-2. All this possession, 22 shots with only 3 on target! Yes VAR, or lack of, cost us a possible two further penalties and also a red card to Palace’s Gary Cahill.

But, we are United, we should have battered Crystal Palace. We shouldn’t be equalising in the 89th minute of the game – we should be defeating teams in the first half so that there’s no way back in the second. It’s still only three games in, four points from a possible nine. Should have been different, but we learn from our mistakes and we go again at Southampton on Saturday. Let’s show them what Manchester United is about!

Why didn’t we get rid of the deadwood? Pogba doesn’t want to be there. De Gea’s head is not in it, he’s more worried about his contract. We should’ve signed a striker to replace Lukaku. Ole is losing the faith in his team, it needs to change fast.

Are there any positives at all? It’s not like Crystal Palace were dominating us, they just threw everyone behind us and got us on the counter. We played well. A couple of mistakes lost us the game but all we lacked was the finishing in the final third.

Bruno Fernandes looks cheap at £70 million now. We could even throw in Lingard for free. I’ve no idea how he’s playing so many games, Sunderland quality for me and never was any more than that.

Too many inconsistent performers, no quality in midfield, Mata on bench until the 85th minute? Ole really isn’t the man to take United forward, his Premier League record as a manager says so.

Yesterday was a classic example of what could and probably will happen a few times this season. Crystal Palace sat in and once they snatched the lead we panicked. Loads of the ball but no cutting edge to break down stuffy teams. Two banks of four from the opposition at Old Trafford is going to be very tough to breakdown with the current squad.

If we go ahead in games we will be okay, but going behind like yesterday will be very difficult without a clinical striker to win these games. It’s hard to put in to words how disappointing yesterday was. We need to stick with Ole Gunnar Solskjaer though and give him time no matter what in my opinion as I think things will come good eventually.

The sun was shining at Old Trafford yesterday and there was expectancy that we had more than enough in our squad to get the victory against Crystal Palace. However, we had bit of reality check as we conceded a last minute goal to slip to our first defeat of the season.

First half, we were feeling our way into the game as Palace had setup themselves to sit deep in their own half and looked to try and counter attack or get something from a set piece. We had a few decent chances with Daniel James nearly scoring only for the ball to be blocked by the Palace defence.

Two free kicks by Rashford and Pogba also came close to getting us into the lead. Lindelof was caught out as Jeffrey Schlupp’s header flicked on clear for Jordan Ayew to put the ball past De Gea into the net as Maguire could not get back in time to make the tackle.

Second half, we huffed and puffed as we searched for the equaliser. We thought we were going to get it when we had the penalty but unfortunately Rashford was unable to convert it. We kept the attack up against Palace but from my point of view, we were doing too many passes and probably should have crossed the ball into the box a few more times.

Daniel James got our equaliser with a delightful curling shot into the goal as the stadium erupted. We urged United on again straight from the kick off but as we chased the winner, it became our undoing as Palace countered us and Van Aanholt hit the shot under De Gea.

The atmosphere was great again at Old Trafford and especially from the Red Army in the Stretford End as we got behind Paul Pogba after the abuse he had suffered after the Wolves game with us chanting ‘There is only one Paul Pogba’. He played really well as he tried to get United moving forward.

After Rashford had missed his penalty, some social media accounts had posted such vile abuse at him. You attack one of us, you are attacking all of us. We are United and we condemn such abuse. We are all red all equal. I believe Jesse Lingard did not have a good game today as I felt he was really ineffective. Yes, he was doing lots of running and trying to press but I did not see much else from him. Today’s result show us there is more work to be done at United.

Pogba has to go. I really thought this summer would see change, that we would finally sign a creative midfielder and a striker, but no, another season with the same problems.