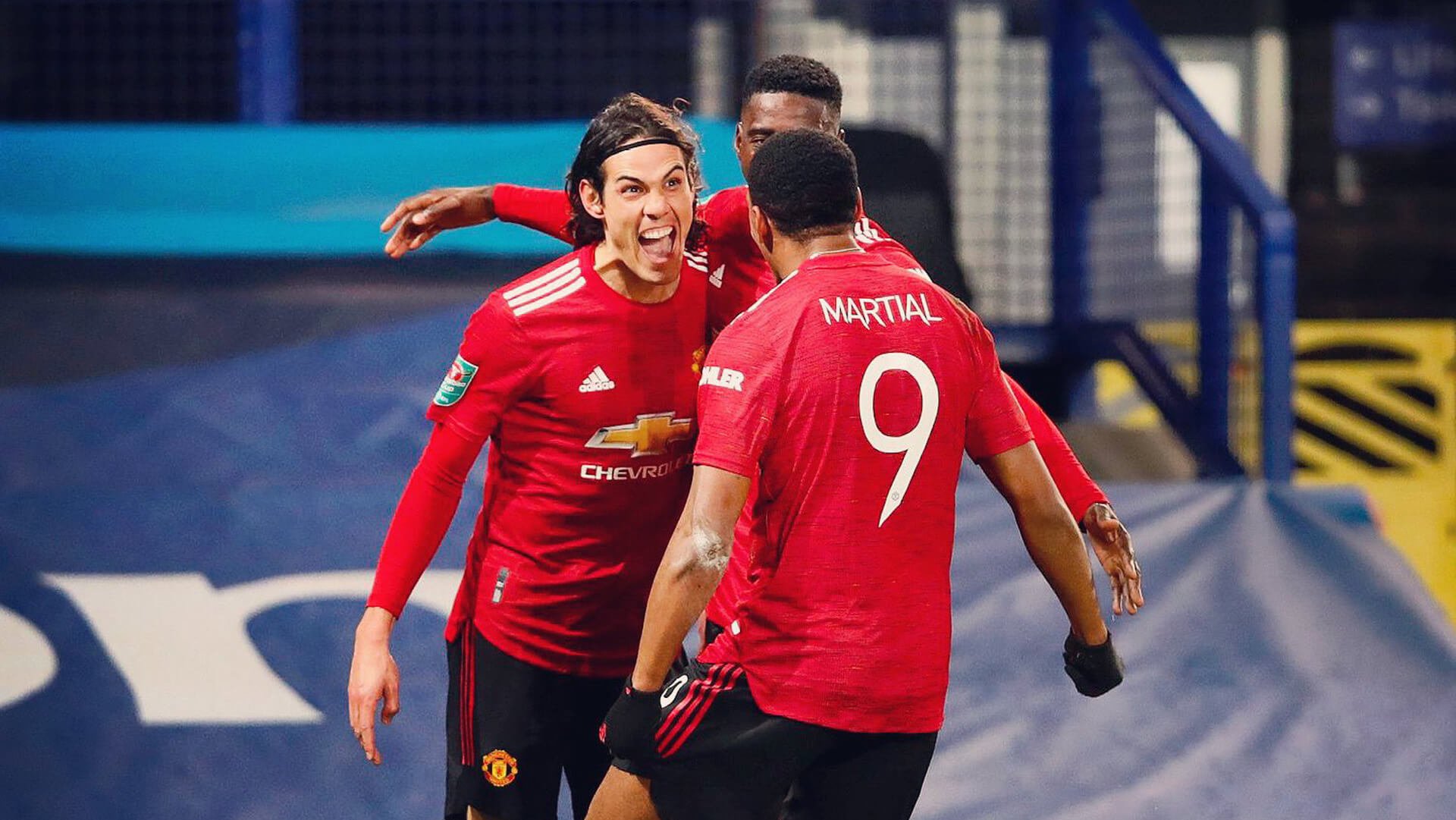 5 Things We Learned from Everton vs Manchester United

Manchester United left it late to break the deadlock against Everton but we’re in the Carabao Cup semi final!

Even when playing a side with home fans in the stadium, Manchester United’s incredible away record on the domestic front continues. Three points had already been gathered in the Premier League against Everton at Goodison Park but it was a spot in the Carabao Cup Semi Final that was up for grabs on Merseyside on Wednesday night.

They came quite late in the day, but Ole Gunnar Solskjaer’s men got the goals their performance deserved and swept Carlo Ancelotti’s blues aside to carry on United’s mission of getting to a Wembley final for the first time under the Norwegian.

Here’s what we learned from an entertaining game:

1 | Edinson Cavani will be worth his weight in goals

It’s fair to say there was a bit of doubt and scepticism flying about when Manchester United signed a 33 year-old Edinson Cavani at the end of the ‘summer’ transfer window.

The signing came across as a bit last ditch, a punt. Coming so late in the day, it’s hard to imagine it was planned but you know what? It’s looking very astute now. The experienced forward is popping up with hugely important goals every few weeks and the 88th minute corker on his weaker foot against Everton was another beauty to add to the list.

There seems to be an acceptance that Anthony Martial, Marcus Rashford and Mason Greenwood are the first choice front three but as soon as rotation comes into play, Cavani can genuinely be relied upon to cause teams problems and grab important goals. As much as he is loved as well, Cavani is quite the upgrade on the soon-to-be-departing Odion Ighalo. This is real forward line depth now.

2 | This is a squad effort at the moment

Dropping big names in and out of a starting eleven isn’t something most managers get to do very often but Solskjaer has that luxury right now. However, having that luxury and actually making the changes without destroying relationships, group harmony and the team’s form is another thing entirely.

Looking in from the outside, there appears to be an authentic positive group mentality growing within this set of players. They’re getting their rewards in terms of results and seeing the benefits of careful rotation right now. It’s a big ask to get a squad of 20+ players of quality to buy into the idea that their starting berth is up for grabs regardless of form but it looks like Solskjaer has them all on the same page for the good of the cause at this moment in time.

Strong, happy squads are what previous successes have been built on. The United boss seems to be cultivating one pretty effectively.

3 | The sloppy starts appear to be behind us

While Manchester United didn’t quite fly out of the traps as quickly as they did against Leeds at the weekend, they did impose themselves on this quarter final right from the first whistle. In fact, the first half an hour at Goodison was dominated by the Reds.

The one blot on United’s report is that they didn’t make Everton pay in that early spell of dominance. The Toffees looked shaken and were being forced into simple errors, something that United themselves has been guilty of in far too many games so far this season.

There was no early goal conceded by Solskjaer’s team, though, and the last two games seem to indicate that the jittery openings to ties are becoming a thing of the past. Add consistency and a truly clinical edge and we’re in business with this group.

4 | Donny van de Beek was shoehorned into the side

Let’s be clear, there’s no doubting the quality of Donny van de Beek. That said, aside from glimpses of class, this game more or less passed the Dutchman by. There’s an argument that he was shoehorned into the team by Solskjaer on Wednesday night.

It was the first time that Van de Beek had started in the same eleven as Paul Pogba and Bruno Fernandes. That was a trio many fans were looking forward to seeing play together but it was clear that there is work to be done to make that combination work more effectively. In truth, he would probably prefer to be playing in the place/position of Fernandes or Pogba, rather than out wide.

It may have been a decision purely taken to give Rashford a bit of a rest but dropping the midfielder into a largely unfamiliar role didn’t do him many favours on this occasion. The approach could work over time but he looked like a square peg in a round hole here.

Much to literally no one’s surprise, Manchester United have been drawn against their City rivals in the Carabao Cup semi final. The small bonus, if we can class it as that with our erratic home form this season, is that it’s a one-legged affair at Old Trafford.

The reality is you have to beat the strongest teams to win trophies sometimes. That isn’t always the case (as Manchester City have found in some of their cup runs in recent seasons) but United’s route to silverware will be jointly occupied by Pep Guardiola and (probably) Jose Mourinho. Coming out on top against those two would be a massive coup for Solskjaer if he is to win the Carabao Cup.

We’ll find out if his side can take the next step of getting to a final in the first week of January.