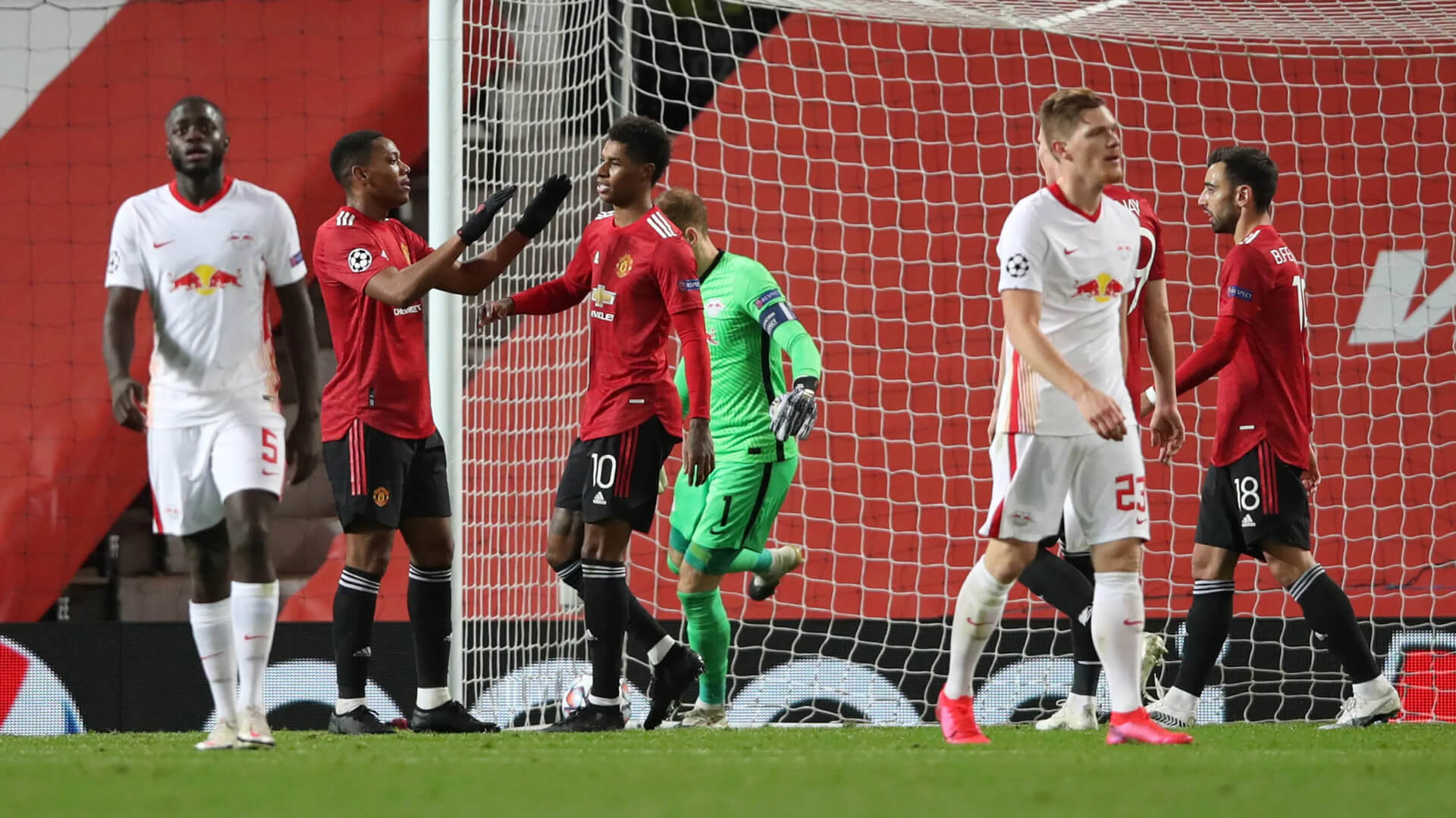 A solitary point will get Manchester United into the knockout stages of the Champions League but getting it away to RB Leipzig will be no easy feat.

Manchester United could be home and hosed, safely in the pot for the last 16 of the Champions League but, as ever, this team seem set on doing things the hard way. “It’s a tradition for Manchester United” as Ole Gunnar Solskjaer exclaimed in his pre-match meeting with the media; “We do make it hard for ourselves. That’s been here even since I played, and that’s a long, long time ago”.

To be fair, he’s not wrong. But his team are really making a habit of it this season. Saturday’s clash with West Ham saw Solskjaer’s men a goal down at half-time before suddenly switching it on in the last half an hour to win comfortably in the end. You get the sense, though, that the tendency to give their opponents a goal head-start may bite United on their collective arse if it happens in Leipzig at the Red Bull Arena.

In truth, it took the introduction of both Bruno Fernandes and Marcus Rashford to turn the weekend’s game on its head. Solskjaer was clearly resting both with RB Leipzig in mind and probably had to play the duo for longer than he would’ve liked. Injury to Edinson Cavani at the break forced the manager’s hand to make changes and the Uruguayan will consequently miss this one with a slight problem, as will Anthony Martial who hobbled off later in the piece.

Those injuries have probably just helped to solidify Manchester United’s game plan for this crunch tie. There was a feeling in many parts that a return to the 3-4-1-2 that has served this team so well in big, important away games would be the way forward in this one. Now, with Cavani and Martial absent leaving just the two truly match-fit forwards, Solskjaer’s selection is surely made for him.

Thankfully, it was those two forwards that got the win-clinching goals last time out. Mason Greenwood finished superbly to put United ahead in London and will hopefully get a jolt of confidence from that. Man of the Match Rashford also looked irresistible on the break at the weekend and will relish the responsibility in such a high stakes clash.

There is unwanted drama ahead of this crucial encounter, though. Unsurprisingly, it involves Paul Pogba, or more specifically, Paul Pogba’s agent. The Italian gobshite has been declaring to his homeland press that his client’s time at Manchester United is ‘over’. It’s a shame that he has felt the need to come out with this statement at such a time but we all know that he has no interest in the welfare of his player’s club, only his own bank balance.

It also comes on the back of Pogba showing improvement and scoring a beauty to equalise against West Ham. It’s unlikely that he would have started against Leipzig anyway but this latest debacle won’t have helped his cause. Instead, you would expect that Solskjaer will opt for safety first again, something Pogba doesn’t really provide.

With Fred suspended, don’t be surprised to see a functional midfield of Nemanja Matic and Scott McTominay sat behind Bruno Fernandes. Manchester United will in all likeliness be counting on the Portuguese to link with Greenwood and Rashford on the counter with the help of their wing-backs. Well, Alex Telles at least. The Brazilian should be keeping his place in the side even with the return of Luke Shaw to fitness.

That doesn’t mean Luke Shaw will get the night off. Despite Eric Bailly and Axel Tuanzebe both being fit and available to join Harry Maguire and Victor Lindelof in a back three, I suspect that the United boss may just opt for Shaw in the left centre-back spot if he is sharp enough to start. It has been a tried and trusted approach in so many big games now that you have to assume Solskjaer will stick with what has worked if fitness allows.

What the 3-4-1-2 does offer is a blend of caution and ability to play on the break effectively whilst freeing the likes of Telles from too much defensive duties. Playing with a bit of caution is probably necessary. This is after all, a Leipzig team that put three past Bayern Munich at the weekend in a 3-3 draw which shows they’re capable of being dangerous against good defenses but on the other hand, are also susceptible at conceding goals in recent weeks. They left it late to win 4-3 against Istanbul Basaksehir in the last game week and obviously, Manchester United put 5 past them at Old Trafford. It would take a brave person to bet on similar occurring on Tuesday night.

They have to win to go through so they’ll be going for it. It will be interesting to see if United do the same.